EasyPay and Destil Hostel have started their first collaboration with the sale of online tickets for the concert of the well-known Albanian-Macedonian alternative band Blla Blla Blla.

Blla Blla Blla come to Tirana on Saturday, November 11 at the Pyramid. The concert is part of their their fourth album promotion “Brum për Medioferr”. Live gig starts at 21:00, with support band 3:56AM.

Everyone who’s interested can buy online tickets from the comfort of wherever they are via EasyPay or Visa by following the link : http://ticket.easypay.al/destil/EasyPay

Online tickets cost 700 Lekë and no extra fee is charged from purchasing online. After buying an online ticket, people will receive an email with the electronic tickets attached,  which can be printed or displayed from your phone before entering the concert . (Make sure you have enough battery!)

Buy your ticket at : http://ticket.easypay.al/destil/EasyPay 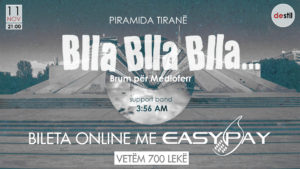 Blla Blla Blla is an Albanian-Macedonian rock band from Skopje. It was formed in 1988 by then band members Idriz Ameti, Ermal Skupi (Mehmeti), Nikola Bočvarov and Blagojče Penov. Later, Ermal (who played the violin) left the band and was replaced by Krenar Ismaili (vocal and violin). Idriz Ameti is the singer. Most of the songs are in Albanian. Their style is called “Over Sky Ballkanishe Re-form” by the band itself, though there is no general consensus in categorizing their characteristic rock. Other styles or genres used are Balkan-rock and punk.

Their first album was released in May 2000 called Blla Blla Blla. “At that time we possessed a minimalist – original approach to music that brought refreshment to these Balkan spaces” the band were quoted as saying about their first album on their official MySpace page. Their second album, called Over Sky Ballkanishe Re-form, was released in 2005. Their music is considered influential beyond Macedonian borders. The band is one of the participants in the Balkan Streets series of South-eastern Europe music festivals featuring popular local groups in multicultural venues. They were among the artistes appearing at the first festival in Kumanovo, Macedonia, in 2009 and also featured on the 2011 Balkan Streets programme.