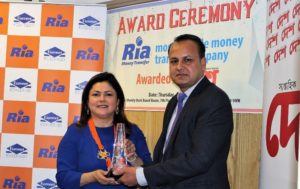 Partner of EasyPay, Ria has won an award for being the Most Reliable Money Transfer Company in the United Kingdom.

Awarded by the Weekly Desh, a popular local newspaper which serves Bengali and Bangladeshi communities in the UK, the honor recognizes Ria’s dedication to providing a reliable and trustworthy service to the thousands of people who choose to patronize its services each month.

The award was given during a ceremony which took place in London’s Canary Wharf, where staff from Ria were present.

“We are humbled and honored to receive this award from Weekly Desh, which is an integral part of one of the communities we serve,” said Ria’s Managing Director for UK & Ireland, Marcela Gonzalez. “It was quite unexpected, but a very pleasant surprise!” she added.

“This type of recognition lets us know we are on the right path and reinforces our mantra: to put the customer at the heart of what we do. We will remain the most reliable company and keep delivering great service and value to the Bengali and Bangladeshi communities, as well as the others that we serve.”

The team has been working hard to open locations in communities with the aim of being as accessible to its customers as possible. And the inauguration of the newest store at 69 Whitechapel High Street in London, reaffirms the company’s commitment to reaching the communities. According to ward statistics, 38 per cent of the population in the Whitechapel community are listed as being of Bangladeshi origin, with more than 600,000 Bangladeshi people in the UK. 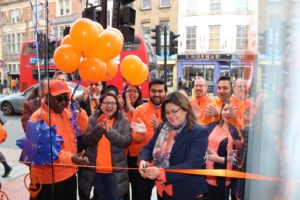 Ria’s Business Development Manager, Bangladesh, Mr Tanvir Alam, said of the new store: “The Whitechapel store is a great example of the Ria retail brand in the local community. It’s open for business seven days a week, making it more convenient for our customers to make a transaction, be that a money transfer or currency exchange.”

While Ria’s Whitechapel store is the latest addition to the UK retail network, there are more company-owned stores planned to open this year. Ria also recently opened an office in Dhaka, Bangladesh, to offer even better customer service to beneficiaries.

EasyPay and Ria launched a partnership by the end of 2016, aiming to make remittances easier, safer and more reliable for Albanian citizens and Albanian diaspora. This partnership offers the lowest commission rates in the market!