The PayPers writes about EasyPay and the new partnership with Ria 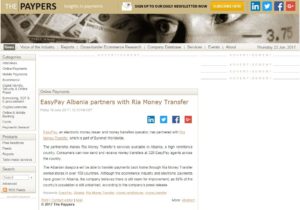 EasyPay participates for the first time ever at the Money 2020 Conference in Copenhagen, alongside thousands of most important companies in the world including Google, AirBnb, Western Union, Silicon Valley Bank etc.

Money20/20 organizes the largest global events enabling payments and financial services innovation for connected commerce at the intersection of mobile, retail, marketing services, data and technology. With 11,000+ attendees, including more than 1,700 CEOs & Presidents, from over 4,500 companies and 85 countries at its 2016 U.S. event, Money20/20 is critical to realizing the vision of disruptive ways in which consumers and businesses manage, spend and borrow money.

Although the conference hasn’t kicked off yet, The PayPers has written an article about EasyPay, mentioning its partnership with Ria Money Transfer, too.

Our agenda includes meetings with TransferTo, Skrill, PayKey, and many European and American media outlets.

The partnership between EasyPay and Ria Money Transfer will be announced throughout the conference, too.

” EasyPay, an electronic money issuer and money transfers operator, has partnered with Ria Money Transfer, which is part of Euronet Worldwide.

The Albanian diaspora will be able to transfer payments back home through Ria Money Transfer owned-stores in over 150 countries. Although the ecommerce industry and electronic payments have grown in Albania, the company believes there is still room for improvement, as 58% of the country’s population is still unbanked, according to the company’s press release.”